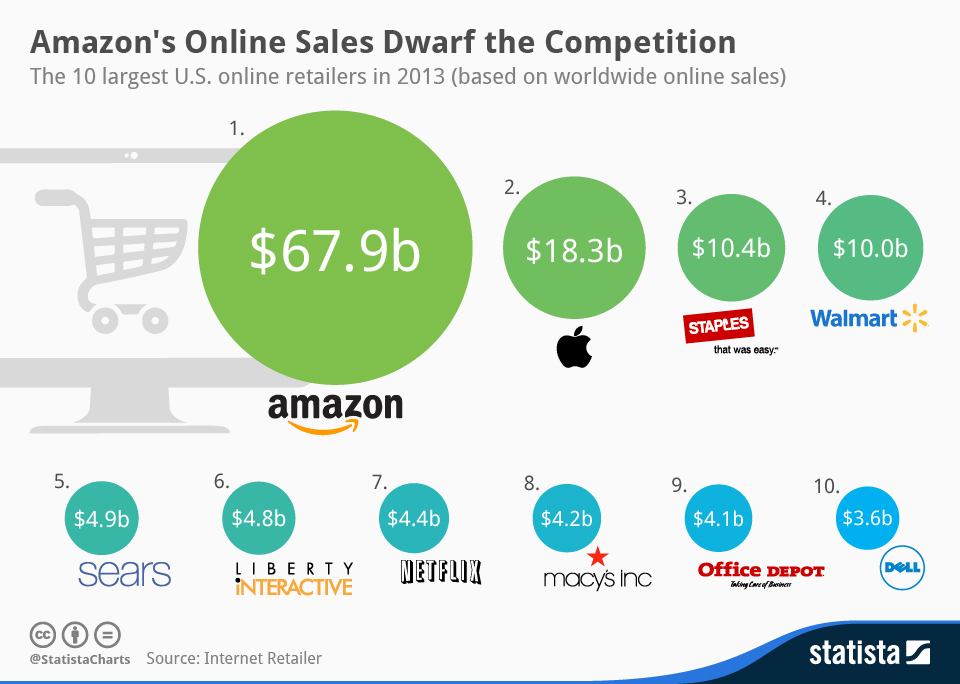 Sales is no longer physical and just focused on retailers. Sales are now fast, anytime and everywhere. There’s no limitation of time and places. Any kind of store is open 24/7 and companies are still exploring new ways to make the difference in the ecommerce that is getting more and more competitive.

In this new, fast growing environment there are a few giants that took over and are now the king of online sales

Amazon is the first and bigger player with a yearly revenue in 2013 of almost $68 billion. Amazon, that is focus on investing and growing, is not just the biggest player in online sales, but also, thanks to Bezos, a multi-level venture with investments in many areas.

The second place is held by Apple, that has reached $18.3 billion in 2013 thanks to its App Store and iTunes Store. Also the office supplies Staples with a yearly revenue of $10.4 billion is one of the most efficient online sales player in the e-commerce scenario.

Among the Big an interesting income is produced by Netflix, the popular video streaming platform, with a consistent growth related also to the opening in Europe and new markets.

As mentioned before, Amazon is focused on a long-term growth. In fact since 2009, despite the lack of profits, the yearly revenues have been giving a reason to Bezos’ vision. Amazon “continues to invest heavily into warehouses, cloud services and its Kindle business as it strives to become a diversified online business competing with the likes of Apple, Google or Microsoft.”