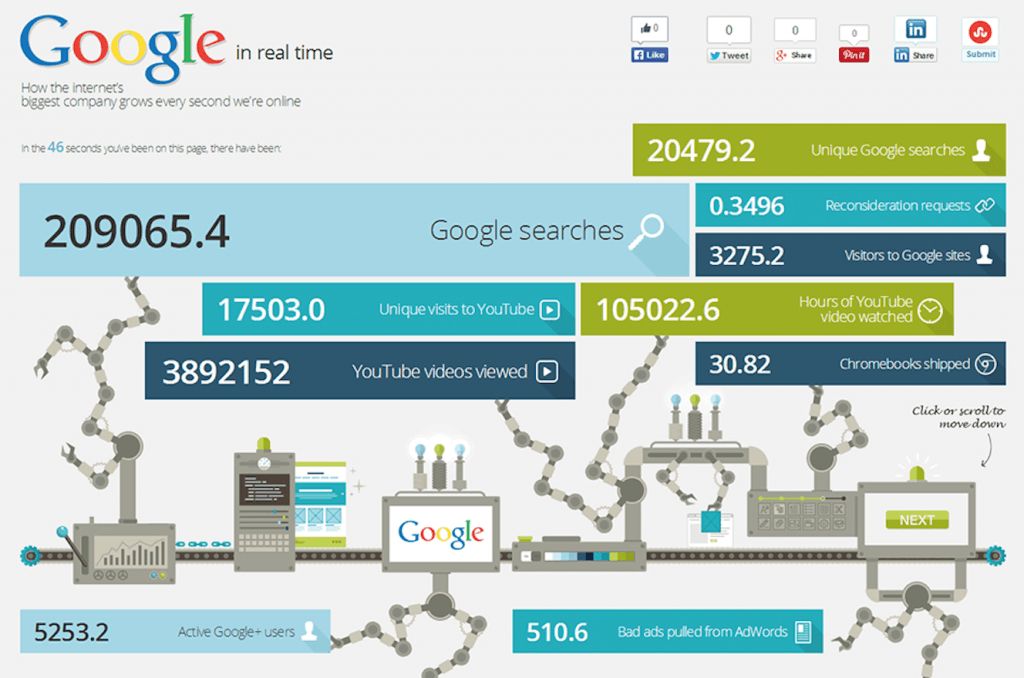 Google in real time: how fast the company grows

Probably in 1998  Larry Page and Sergey Brin didn’t even imagine Google would become one the of the biggest (or the bigger) corporation in the world.

Today Page’s personal wealth is estimated to be US$32.3 billion, ranking him n.19 on the Forbes list of billionaires. Page is also the inventor of the famous PageRank, the foundation of Google’s search ranking algorithm, and he and Brin own approximately 16% of Google’s stock which is evaluated around $350 billion.

There is just one word to describe all this: impressive!

Their goal, “to organize the world’s information and make it universally accessible and useful.”, is pretty achieved today but, how Google is growing in real-time?

Today Google is not just the most famous search engine in the world but also:

– A major video and media broadcaster with YouTube, acquired in 2006

– One of the major social network, with Google+

– A computers and mobile devices merchant with Chromebooks, Nexus and Chromecast

– A mobile operating system with Android and most recently Android Wear, for wearable devices

Google also has huge investments in startups as Uber and recently bought the home appliances company Nest and the cloud based wi-fi monitoring service Dropcam. Furthermore they have recently acquired the satellites company Skybox.

In the real-time graphic below you can see how quickly Google grows and how many searches and views are made every second on the search engine and on YouTube.

But also, how many revenues Google generates, how much invests on R&D and how many gigabytes of internet traffic are generated.

The metrics also involves Google+ and the total active users: about 1,000 users in 10 seconds.

The most interesting fact? Google revenue is about $20,000 every 10 seconds.