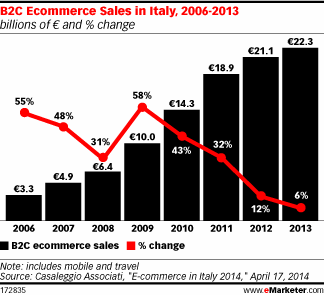 Ecommerce market in Italy is far from mature

Even if with a small positive trend, the ecommerce in Italy plunged compared with 2011 and 2012 when the market grew by 32% and 12%, respectively.

Why? Fundamentally the main reason is related to the economic downturn, in fact “In March employment decreased by 0.1% compared with February and decreased by 1%” (source: INSTAT). This downgrade moved the unemployment rate to a 12,7% and explains, in part, the stop of the ecommerce growth.

But unemployment isn’t the only one reason, in fact, Italy has always had a cash-based economy with the most of transactions without any usage of credit cards and online payments. That’s why ecommerce in Italy isn’t the natural environment for a consumer.

Because of the crisis, retailers are struggling to sales in stores but also to invest in digital platforms and solutions, despite it can be for them the only way to survive.

There’s a long way to go before the italian ecommerce takes on and reach the level of other countries.

That said, where do italians spend most online?

The 54% of ecommerce sales in Italy are in the Leisure, but, incredibly, the 46% of that are spent in online games and bets. The second place is represented by Tourism, with a 27%. 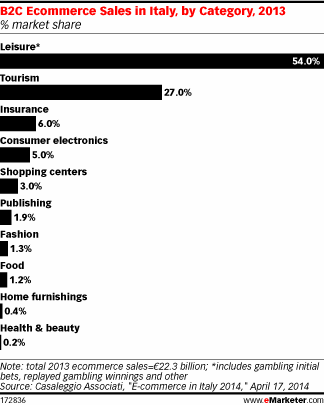 “eMarketer estimates that the number of digital buyers in Italy—people ages 14 and older who make at least one purchase via any digital channel during the year—will continue to rise by single digits each year through 2017, when the digital buying population will pass 18 million”